Tens of thousands of parents across the Toronto area have opted to keep their children home this school year, afraid of sending them back amid rising COVID-19 infection rates. For some families, though, the decision was never really a matter of choice.

In making her decision, Yan had to weigh her daughter’s desire to return to school and be with friends, versus the safety of her parents and mother-in-law, all of whom are currently living with her.

“The risk is she will bring home the virus and then pass it to the seniors living in our house. And because they have medical conditions, once they get in contact with my daughter who could have the virus, they could be really sick,” she said.

“It could be life threatening, so we don’t want to take that high risk,” she said.

Yan’s family isn’t the only one in this predicament. The latest data from Statistics Canada shows that 2.2 million Canadians live in multigenerational homes.

That living situation is one of the factors that has caused some parents to keep their kids home from school.

The Toronto District School Board alone has reported that there are currently 77,600 students participating in virtual learning, out of approximately 247,000 students across 583 schools. The board says the number of students learning online has been going up since school began, as the number of COVID-19 cases surged.

WATCH | The return to school has increased demand for coronavirus tests:

Demand for COVID-19 testing is soaring as cases climb in many parts of the country and students head back to school, so is pressure on the federal government to approve a rapid test. 1:56

Joy Henderson is a community education activist and lives in Scarborough, Ont. Although she opted to send her son to school, she said many of the parents in her community have not because they, too, live with grandparents and can’t afford to take the risk to their health.

“I know my son’s best friend, they’re a multigenerational home, and their kids are staying home,” Henderson said. “There are a lot of kids who live with their grandparents, and they can’t necessarily go to school and then go home.”

Henderson said a lot of the teachers in her area also live with grandparents in the home, causing them to apply for virtual teaching exemptions as well.

Toronto’s largest school board says 20 per cent of its teachers have applied for COVID-19 related exemptions.

It’s not OK, kids should not have to choose between grandparents and schools.– Joy Henderson

Henderson says much of the wariness among families is tied to class sizes. She is lobbying the government to make classes smaller, because she said parents shouldn’t be faced with these tough choices.

“It’s not OK. Kids should not have to choose between grandparents and schools. So, you know, smaller class sizes would be ideal, I still don’t understand why the government is refusing to do this,” she said.

Adding to the dilemma of living in multigenerational households, Henderson said the communities in the greater Toronto area (GTA) that are opting for online schooling in the largest numbers are the communities that are already marginalized, coming from lower income brackets and more reliant on social services. It’s a reality that angers her.

“Anyone who’s seen the data plotted out on a map, it’s largely Scarborough, West End of Toronto, and so a lot of these communities are highly racialized and so are a lot of the parents,” Henderson said. 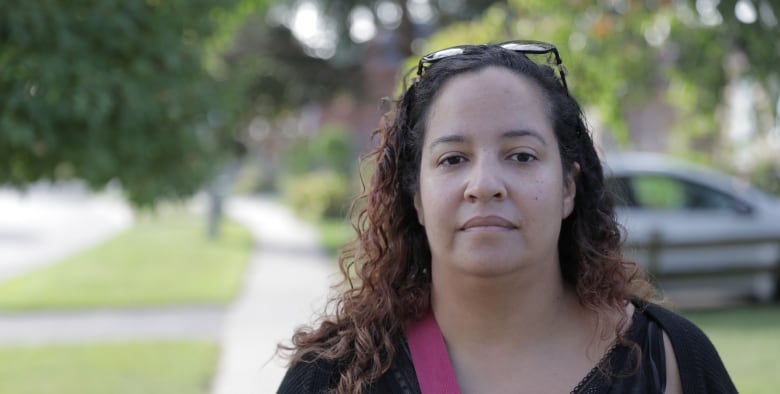 Joy Henderson said many of the parents in her community who are keeping their children home from school are from marginalized and low-income communities that need the social support that a school offers students. (Yanjun Li/CBC)

“Typically, marginalized kids are left marginalized, and so they’re left at the borders, and their needs aren’t necessarily met. They are, you know, missing out on so many social supports within schools, such as extracurriculars, breakfast clubs and, of course, their peers which they need more than others.”

Henderson also points out that some kids from marginalized and less-affluent communities are also opting out of in-class learning because they live in high-rise apartment buildings. The wait times at elevators in those buildings have become impossible to navigate because of restrictions and social distancing guidelines.

Shakhlo Sharipova lives in Thorncliffe Park, a densely populated neighbourhood in Toronto’s East York area. The neighbourhood houses upwards of 30,000 residents over a few square blocks in mid- to high-rise apartment buildings. Sharipova said the wait for elevators in her building is one of the main reasons she decided to keep her five-year-old daughter, Khadija, home from kindergarten this year.

“They are every time busy, and it’s even scary,” Sharipova said. “Before it was OK, because there was no limit to the elevators entrance. Right now, they are limited to two or three people, and you can’t go in if there are three people, so lines are much bigger.”

She said she often waits 20 to 30 minutes to get on an elevator each time she needs to use one. Making that trip several times per day has proven troublesome for Sharipova and many in her building.

Madison was eager to get back to school to see her friends, but the family felt protecting the health of her grandparents was the right decision, so she’s taking her classes online. (Perlita Stroh/CBC)

But Sharipova said living in a working-class area like hers has added a burden for parents who have chosen to keep their kids home.

“Online education is not an easy one,” she said. “You have to have, at least, a computer and reliable internet, WiFi. And when you have two or three kids taking online education, having one computer is not enough.

“Parents even message me asking if I know of any resources to donate refurbished or used laptops for their kids.”

Weighing the risks and benefits has also meant different schooling arrangements for children within the same households.

Sharipova is keeping Khadija home, but her son Ayub, 19, has severe developmental disabilities and is going to school. She runs a support network for parents of children with special needs, and made the difficult decision to send Ayub back to his day program because of how hard the lockdown in the spring was on him.

“He’s immune-compromised and, of course, I am concerned about him,” she said. “He has a lot of medical conditions that make him very vulnerable to those infections and the virus, but I sent him to school because he needs those social interactions and the types of therapies he gets at school.

“During this time he was at home, I found that he was regressing, actually, some of the skills he had before he’s lost.” Shakhlo Sharipova’s son Ayub has severe developmental disabilities and is immune-compromised, but his mother felt the risk of COVID-19 infection posed by his small classes was outweighed by the benefits he receives through special school programs. (Perlita Stroh/CBC)

Sharipova finds comfort in the fact that Ayub’s classes are limited to four or five students, because of the special needs his peers have — something that’s very different in Khadija’s mainstream kindergarten classroom of 20-plus students.

And parents will face another round of decisions soon. All of the parents in the GTA who have opted for virtual school, regardless of their reasons, are able to reassess their choice later in the year.

Coronavirus: What’s happening in Canada on May 25

Alberta has gained doctors this year despite concerns over exodus

Permanent residents of Canada with children will be allowed to leave Wuhan, China