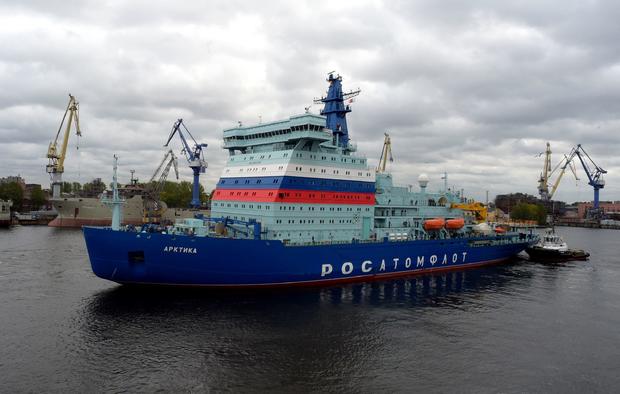 Russia’s nuclear-powered icebreaker Arktika leaves the port of Saint Petersburg on September 22, 2020 for its maiden voyage to its future home port of Murmansk in northwestern Russia, where it is expected in two weeks after undergoing tests of its performance en route. OLGA MALTSEVA/AFP/Getty

St. Petersburg — Russia’s new flagship nuclear-powered icebreaker, said to be the world’s largest and most powerful, left a shipyard on Tuesday headed for the Arctic. The massive ship is the physical representation of President Vladimir Putin’s ambition to increase Russia’s presence in the remote region.

The “Arktika” (Arctic) icebreaker finally sailed from St. Petersburg — after a three-year delay caused by supply chain and technical hurdles — and headed for the northern port of Murmansk, where it will be stationed.

The two week journey will be the vessel’s first test in icy conditions, and make it the first in a series of planned additions to Russia’s fleet of icebreakers.

The Arktika is more than 570 feet long, as tall as a 15-storey building, and designed to smash through a layer of ice 9 feet deep. While Russia is the only nation to have nuclear-powered civilian ships right now, China is catching up, developing an icebreaker of very similar proportions — with similar ambitions to open up the Arctic.

The ship is crucial to Moscow’s efforts to develop a clear path for freight traffic along the Northern Sea Route, which runs from Murmansk to the Bering Strait near Alaska. Russia hopes the route can become a regular commercial transport link between Asia and Europe.

Last year, Putin said the country’s Arctic fleet would operate at least 13 heavy-duty icebreakers, most of them powered by nuclear reactors. Boosting Russia’s presence and commercial potential in the resource-rich Arctic region has been a priority of Kremlin policy during Putin’s rule.

In recent years Russia has actively pushed for dominance in the Arctic, where its main rivals are Canada, the U.S., Norway and China. 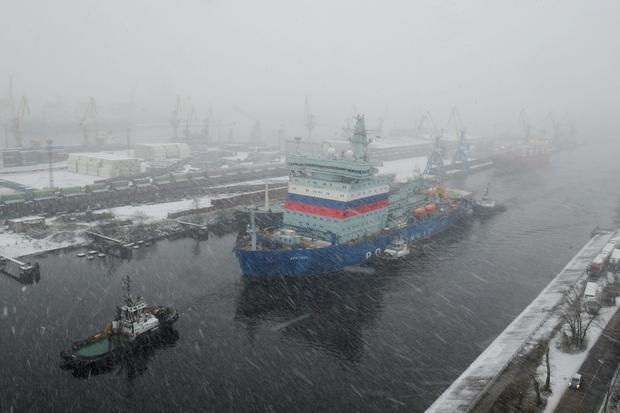 “This wonderful ship, this vessel, in the nearest future will every day corroborate our sovereignty in the northern territories of the Arctic Ocean,” St. Petersburg governor Georgy Poltavchenko said at Tuesday’s launch ceremony.

“Russia’s Arctic attracts many who are interested in its resources. But the Arctic is ours, and we’ve proved it,” he said, adding that Russia was ready to cooperate with other countries.

The Arktika ship was named after a Soviet-era icebreaker that became the first surface ship to reach the North Pole in 1977. The new vessel is the first major step in Russia’s bid to renew its Soviet fleet, and increase traffic in Arctic waters.

Environmentalists have raised concern over the growing presence of nuclear power in the sensitive region, already plagued by problems linked to climate change.

According to some estimates, the Arctic holds oil and gas reserves equivalent to 412 billion barrels of oil, about 22% of the world’s undiscovered oil and gas.

The Saints are saving Taysom Hill for something, but what?

For Procter & Gamble, a sales bounty from hoarding